‘…… a simple musing developed into a small conversation that led to something somewhat more significant…...’

What was once a mere thought in the back of my mind, a simple musing developed into a small conversation that led to something somewhat more significant and that was the gatehouse at the Art and Crafts country house we were building in Oxfordshire. For a long while I had been considering the development of the courtyard around the house. By this time, we were a long way through building the main structures. We had built the main house, the stables, the summerhouse and the East wing. At this time the client and their family were in occupation of the house and enjoying the spaces and gardens that had been created for them so far. 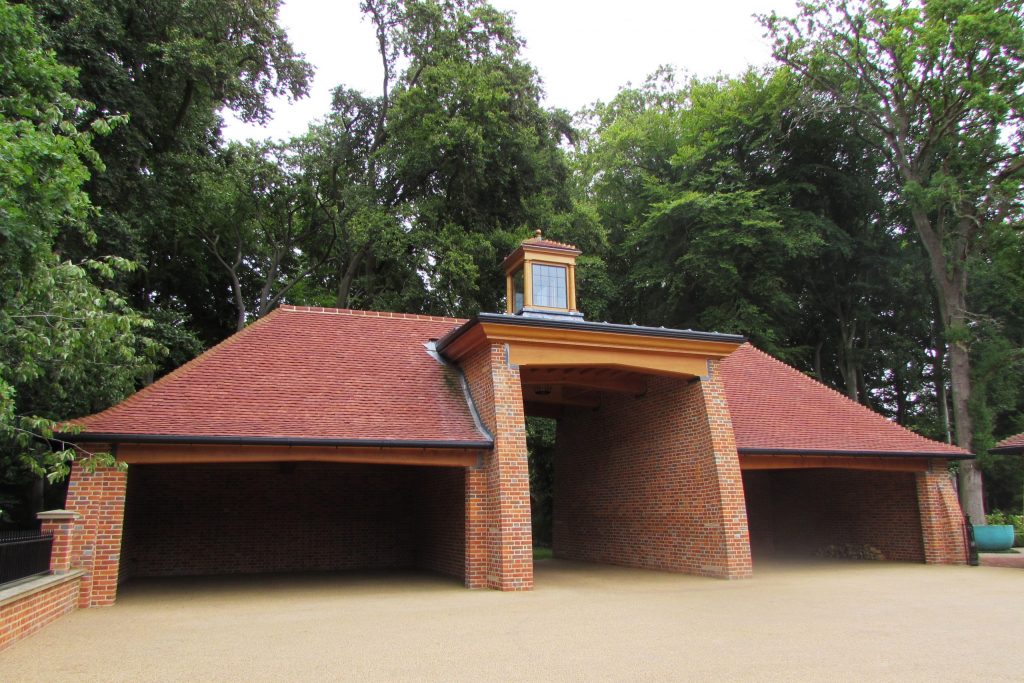 The Gatehouse and carport bays as viewed from the internal courtyard

‘…… a formal entrance and a full courtyard framed by the main body of the house…...’

I had previously explored the idea of a structure that would form the East wall of the courtyard to the main house and we had already constructed a wall with iron railings and an opening in it from the driveway to give access to the courtyard that then led to the gardens in front of the North elevation and main entrance. However, there was much more to play with here and the opportunity to finish off the courtyard was too good to miss. I produced a simple pencil sketch that showed a perspective of my idea for a gatehouse that creates a formal entrance and a full courtyard framed by the main body of the house on the South elevation, the coach house on the West and the dense beech woodland to the North. At the time, I am not sure whether the client wanted to shake me, hit me or thank me for producing the design. It was clear the client wanted us to work on the project and to take the design further, but this was mixed with the thought of another long stint of building works, which he and his family had already endured during the construction of the main house and all of the grounds. However, despite any misgivings,  he was excited and instructed us to proceed. After obtaining the relevant permissions, we started construction of what was one of my favourite parts of the entire site. 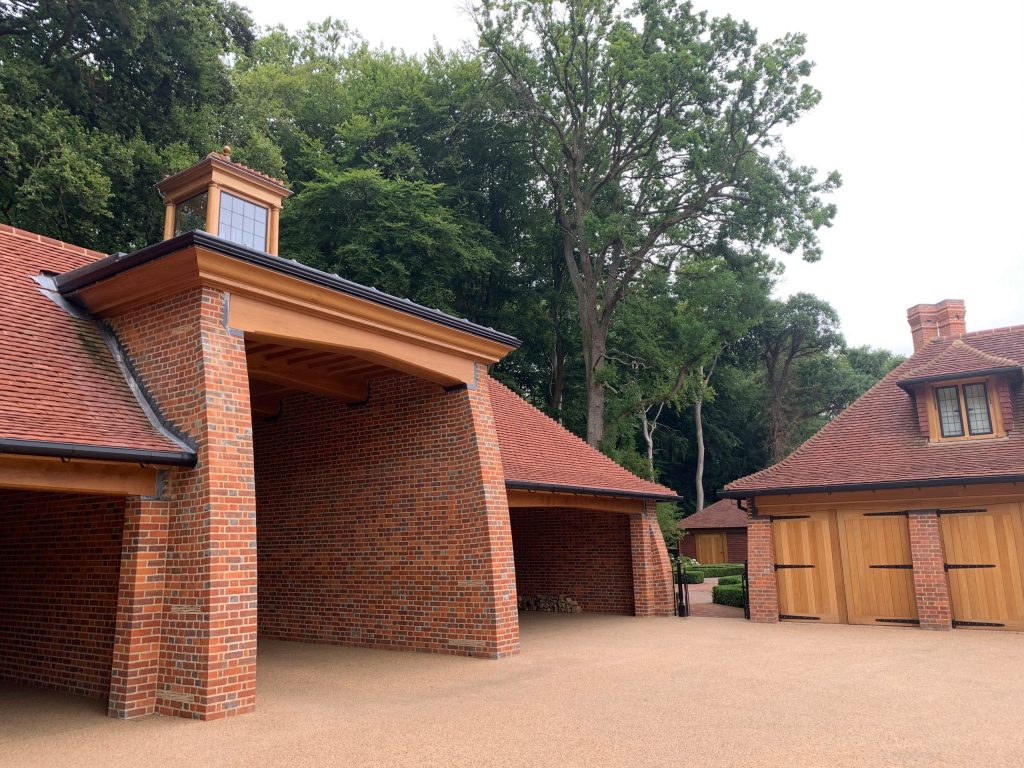 The Gatehouse frames the courtyard in front of the house 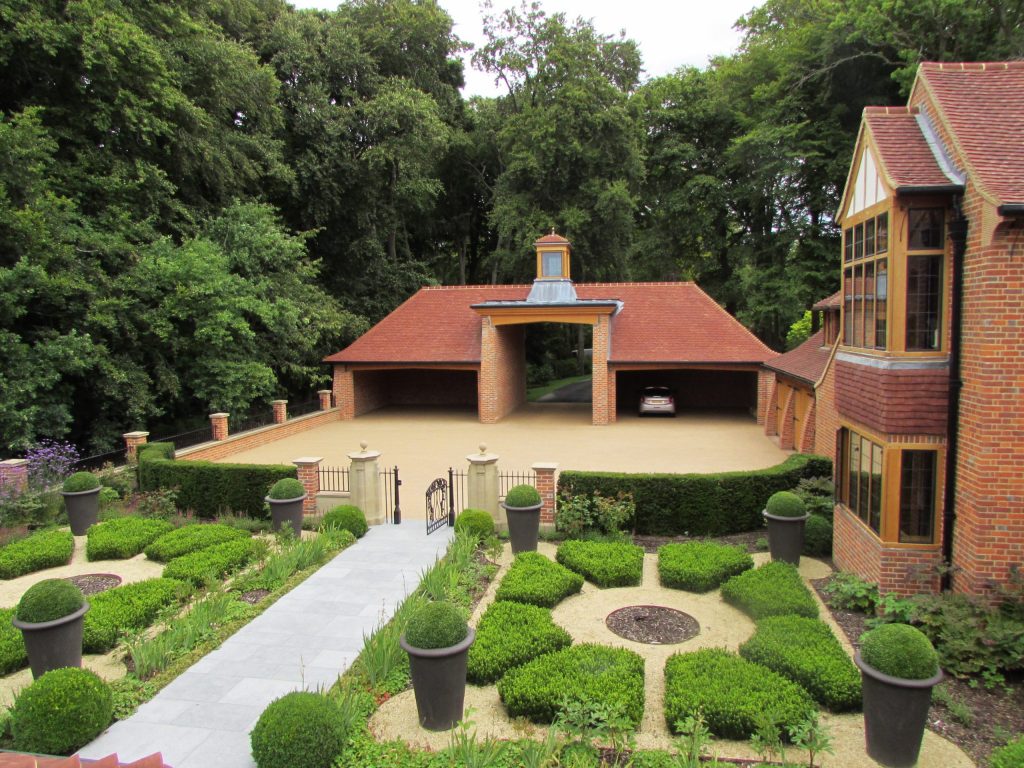 The Gatehouse in context with the house

I had always wanted to develop a design that reminded me of the entrance through Orchards, which is a home designed by Luytens. The great archway created in flat beam sections were also present in other designs such as Great Maytham which I had wanted to develop further. Jess developed the designs with me, and we knew that the main opening had to be huge to cater for emergency vehicles, bin lorries, ambulances fire trucks etc. so the scale of this was dictated largely by that. Either side of this large central opening, generous car ports are for daily use by the family. We had no intention of covering these with oak doors, and designs where we showed this were quickly screwed up and thrown in the bin, as we wanted to maintain the depth of the structure to give the feeling that the courtyard was as a large and open as possible. The North wall of the courtyard forms the outer extent of the gatehouse. On entry to the site, the flanking bays are constructed of solid brickwork with a pair of blind triple-header arches with a niche to the centre, created by stepping the bricks back by four inches. Brick buttresses frame the corners and the overhanging sprocketed eaves pick up the same detail from the main house, allowing the hipped rooves to sweep up to meet the central mass. 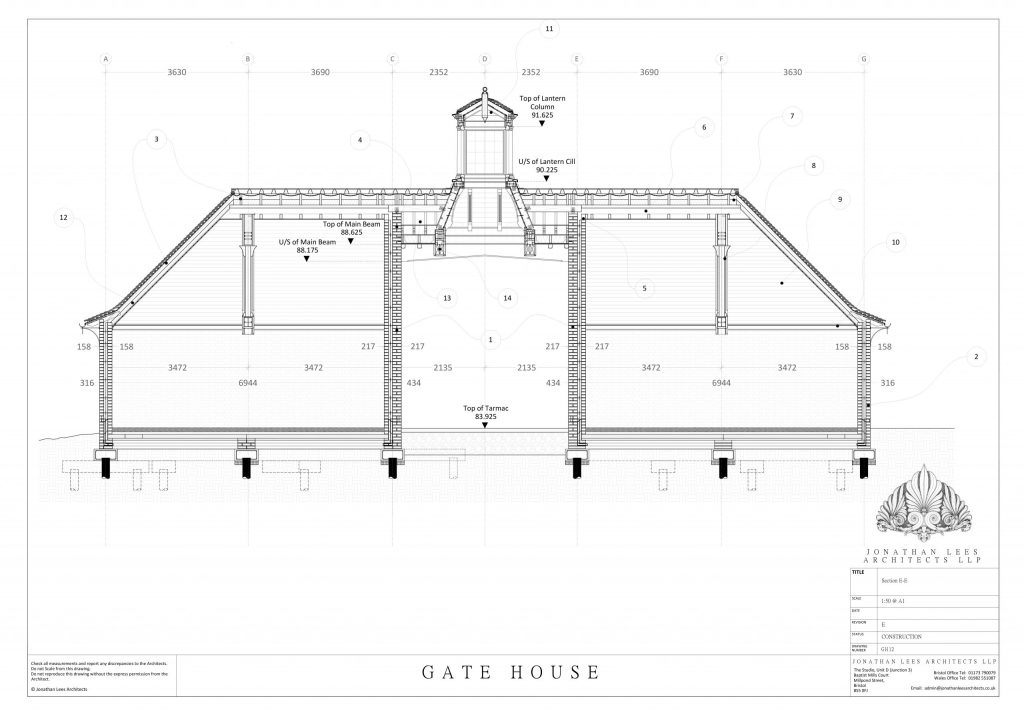 Section through the Gatehouse

‘…… they dwarfed anything else that we had drawn and were built to absolute perfection…...’ 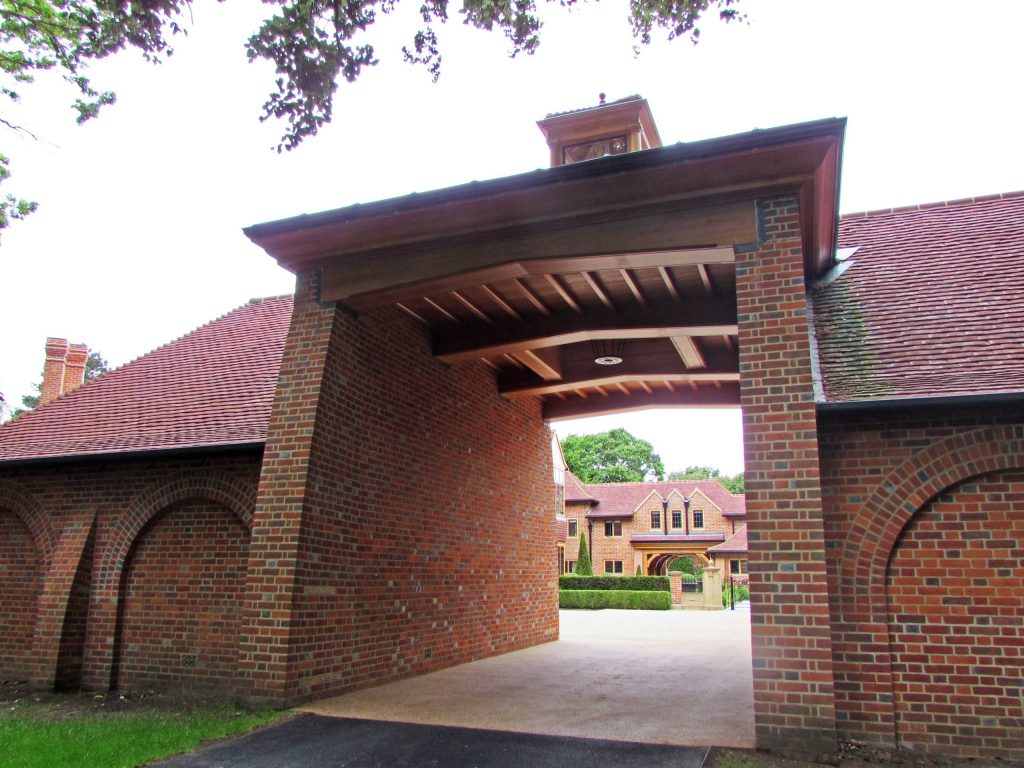 The entrance to the estate from the woodland drive

‘The richness and texture of the brick alone was enough……‘

The central entrance was created with massive brick buttresses of a scale we have not developed before, they dwarfed anything else that we had drawn and were built to absolute perfection by Fusion Brickwork. We used creasing tile jumpers to create the gentle sweeping curves that enhance the mass of textured undulating brickwork that forms the main walls. A pair of decorative stone air-bricks that we developed for use across the site, were the only decoration on these flanking walls as you enter the property. The richness and texture of the brick alone was enough to create a feeling of warmth and quality as you travelled through the archway before the house is framed in front of you. 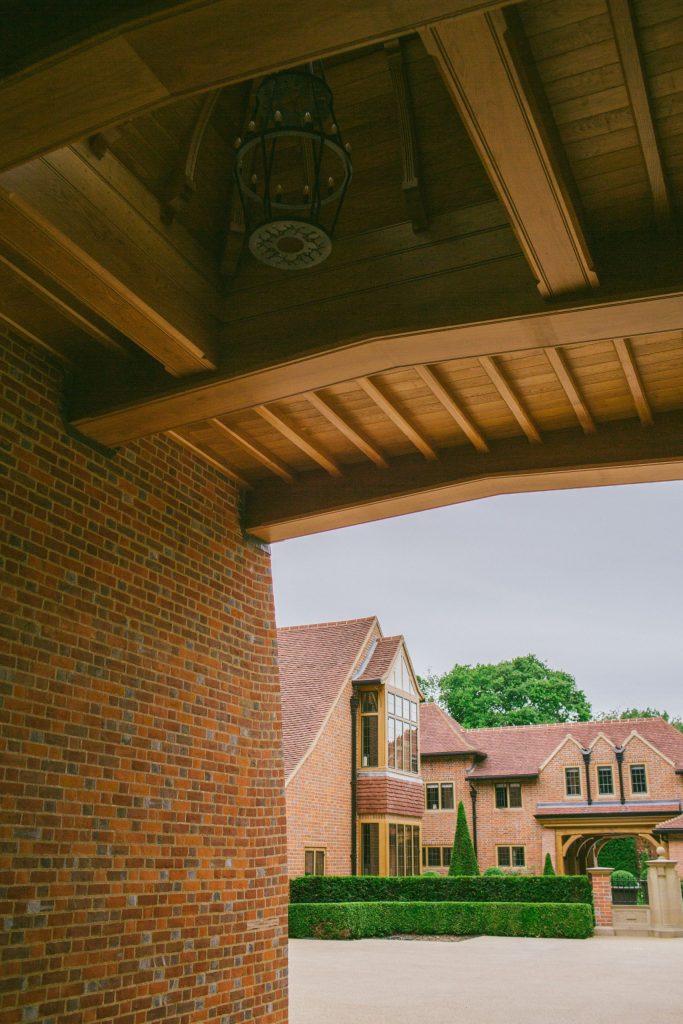 The underside of the Gatehouse cupola 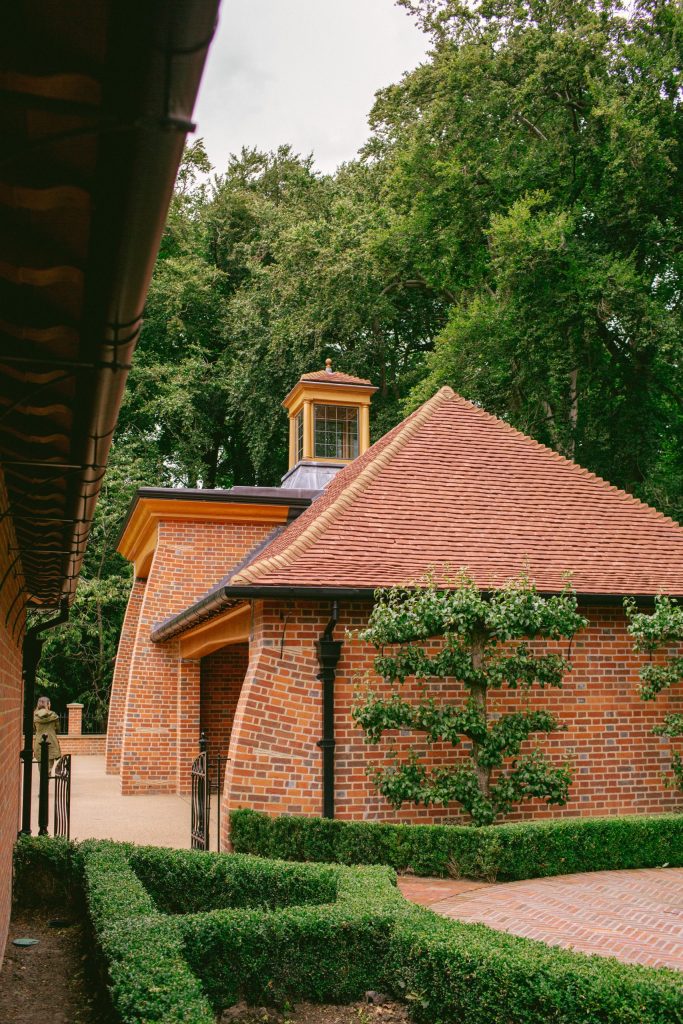 The side elevation of the gatehouse and Oak cupola

‘…..the crowing glory on the top that is the Oak cupola.‘

The whole ensemble was brought together by the roof of the central bay. I wanted to enhance and take a further step forward with a detail similar to the large cornicione over the cartway to the couch house. Essentially, this is a large section of oak that was constructed around a rib cage substructure of both timber and steel. In the gatehouse this was on a significantly larger scale. The cornicione frames the opening and passes back into the intersecting roofs of the two bays either side, with a leadwork flashing detail at its abutment to the sloping roof. It is crowned by an ogee gutter, unlike the half round gutter that we had used elsewhere, which then dispels water onto the two roofs either side and capped with a stepped lead roof that is very much on show. Lead rolls at concentric centres lead to a turret with angled cambered sides and creates the base for the crowning glory on the top that is the oak cupola. 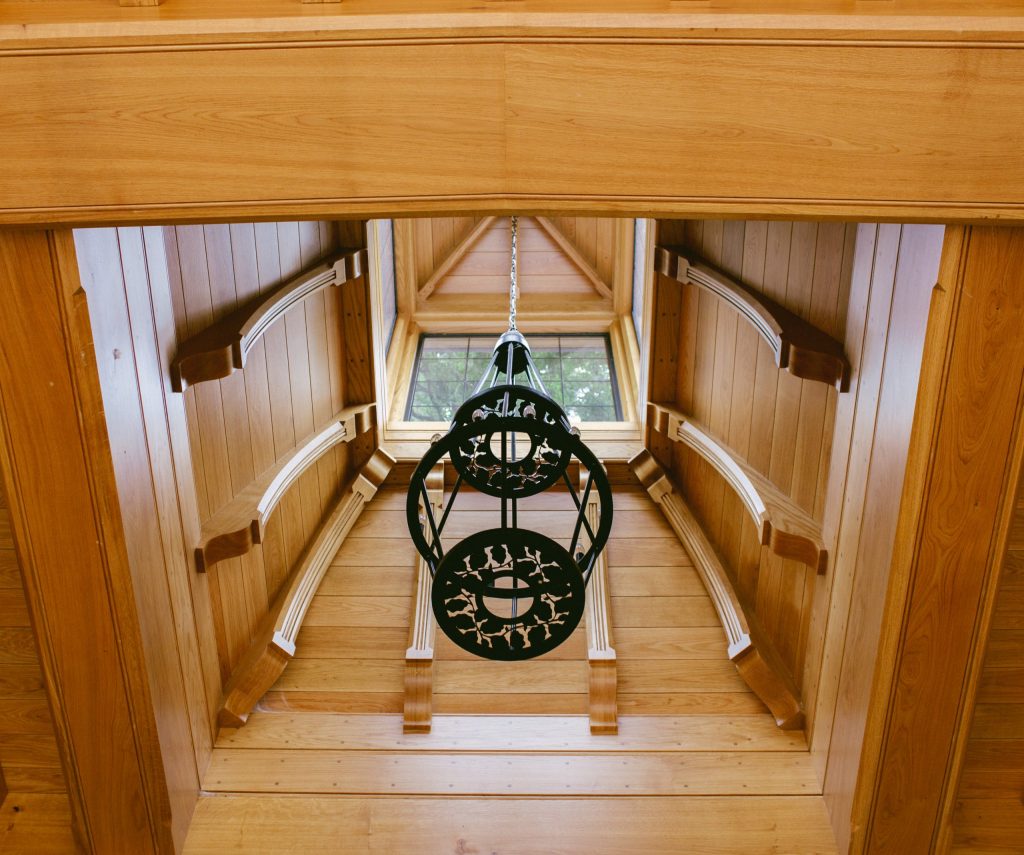 The Oak rib-cage cupola and lantern 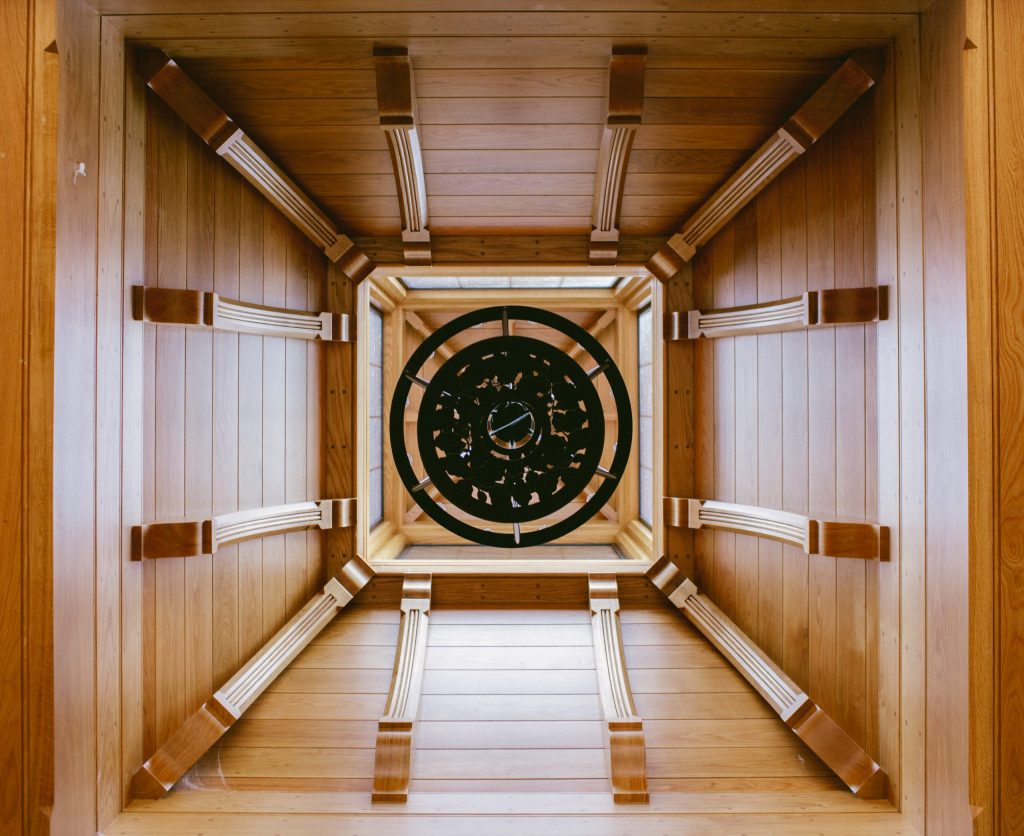 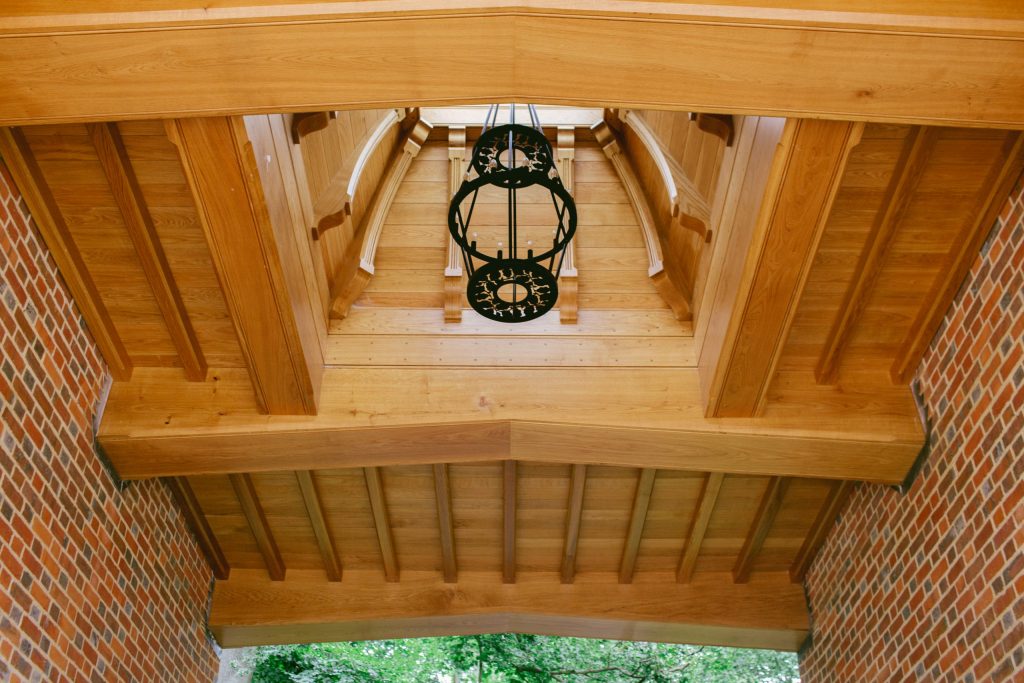 The Oak ceiling and cupola to the central bay

The cupola and roof were designed and constructed in several phases. Four massive, engineered beams span the central opening, each timber as clean as could be, with the central bay open to allow light to shed into the space from the lantern above. The scale of this is enhanced by the tapering nature of the turret supporting the cupola above. We designed the internal spars that mimic the detail of the hammer beams in the main house stairwell, which have a gentle sweep leading to a cyma moulding at the top and carry a ledge supporting the cupola over. Each of these bladed spars has a quad reed moulding to the front face that adds further detail, with the whole structure clad in oak boarding to the inside, leaving the spars on show. Abovethis sits the lantern, or cupola, which consists of four three-quarter engaged Doric columns with oak frames in between and bronzed casement inserts set into the oak frames. A small entablature crowns the structure that supports a leadwork flashing detail and a pyramidal roof constructed of a central octagonal oak boss, hook to the bottom and sphere to the top, covered with lead which flashes over the tiled roof. Internally, the hip and jack rafters creating this small roof are exposed so that when you drive or walk underneath the cupola you can see all the way up to the very top of the towering lantern.

We also designed a metal chandelier that hangs from the lantern over the driveway. This is constructed in stainless steel and designed using the same motif details we had developed throughout the site. Although I hand a hand in the detail of this light, it was largely down to Lydia’s creation. We also developed the pair of lights that hang in the central bays to each of the car ports and are similar in character, with a decorated base supporting candelabras and hung from the apex of the ceiling. 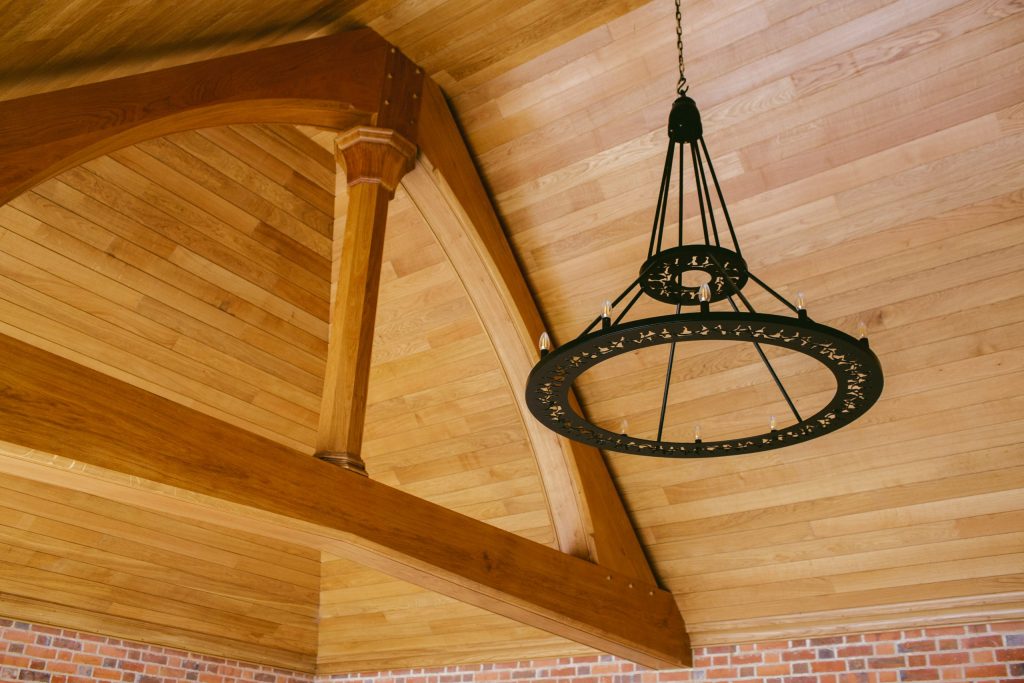 The Oak ceiling of one of the car port bays 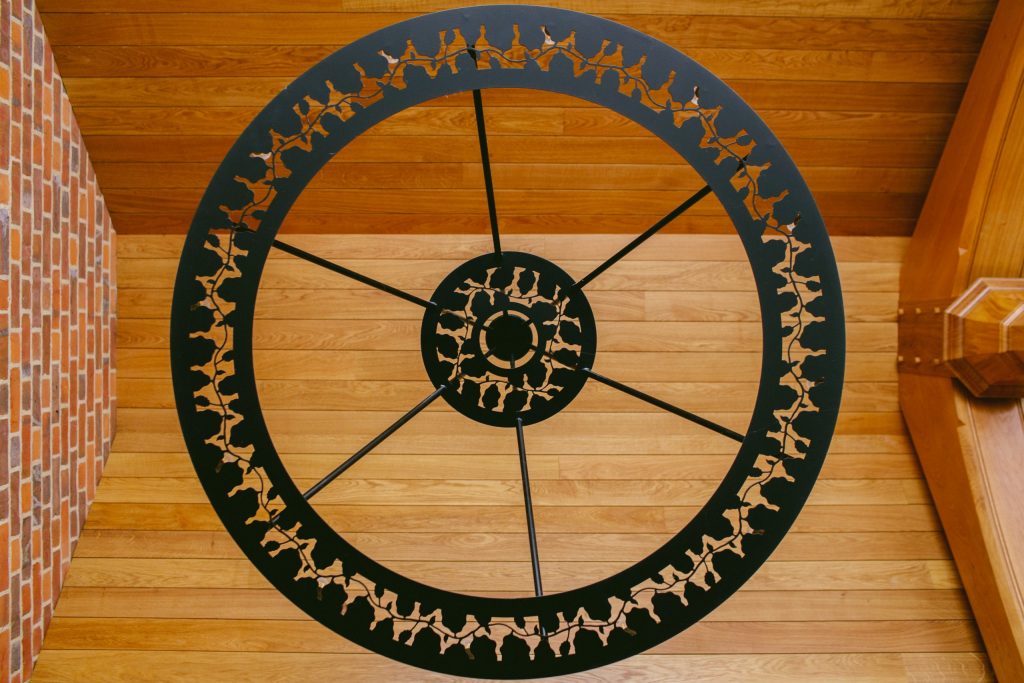 Decorative iron chandelier in both bays 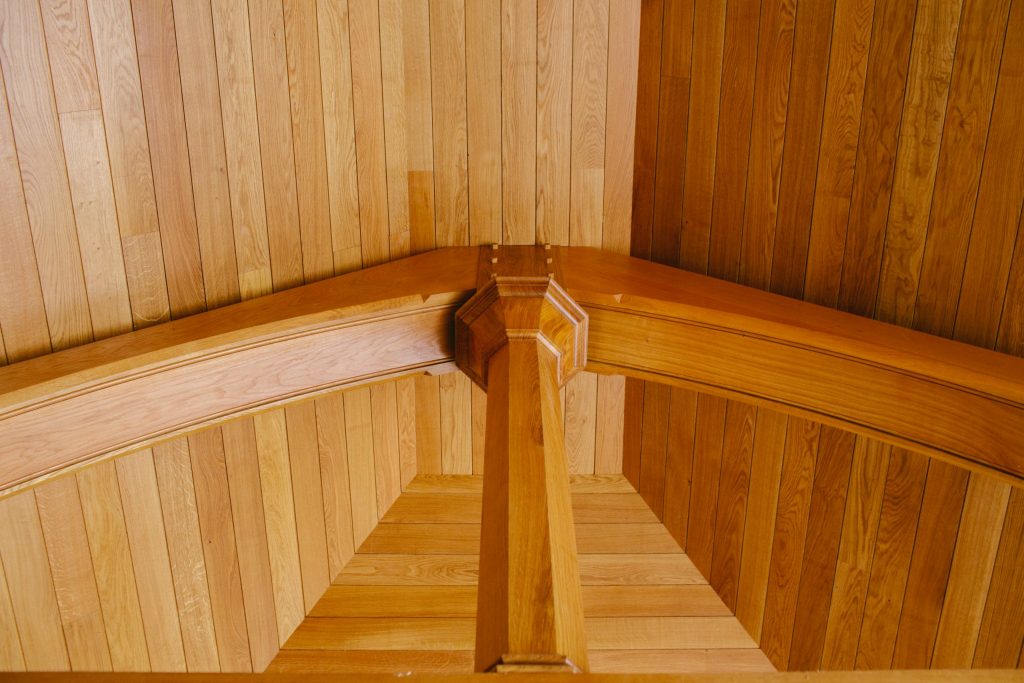 Each of the bays are created using a massive, engineered oak truss to a scale that dwarfs even the Summerhouse bladed trusses. The huge eighteen-inch sections of oak used to create the tie beams have a cambered bottom that intersect with even larger beams spanning the double width opening of each side of the car ports. The tie of the truss, in this case the central post, is an octagonal column that Jess and I designed to be based on a Doric column. The simple fluted capital support a square boss, allowing for a mortice and tenon joint connecting to the oversized principal rafters which support the main roof. These principal rafters are curved in a similar manner to those in the summerhouse, out of huge sections of oak.

‘….nestled among the trees and the overhanging bows of the great beech and oak trees…..‘

Over the trusses, the roof is clad with oak boarding with the brickwork walls left exposed to the inside, allowing for the mass of the central walls to also be present on the inside of both of the car ports. The intention was not to create an internal structure, it was to create an open car port and archway that resembled a traditional gatehouse, nestled among the trees and the overhanging bows of the great beech and oak trees that have been growing there for decades. 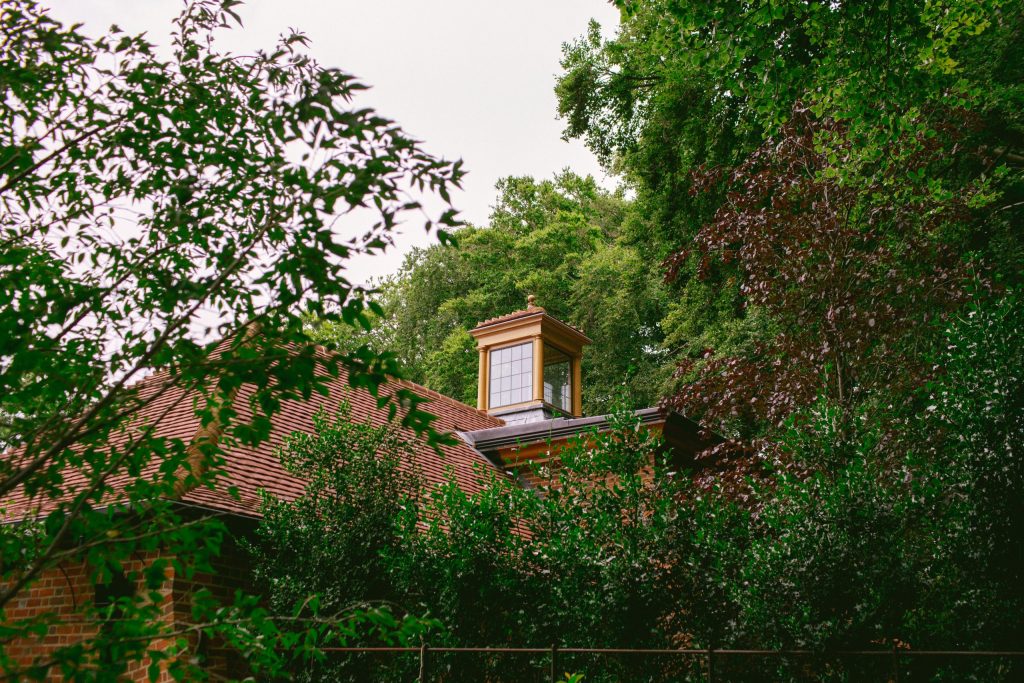 The Gatehouse sitting amongst the great bows of the woodland

‘….probably the most unique building on the site….‘

Credit needs to be given, in this instance, to the skill and attention to detail that was afforded to the joinery by the craftsmen at Gelder Joinery who sourced through the reams of large section oak and discarded more than sixty percent of the original timber, to get the best possible quality timber available and achieve the sections and quality of oak that we required and would accept.

I had hoped when we began the process of developing the designs for the gatehouse, to create a courtyard that I would be happy with and that I knew the client wanted from the outset of when he originally bought the house. I was delighted with the result, which is probably the most unique building on the site, and how it integrates with the surrounding buildings. 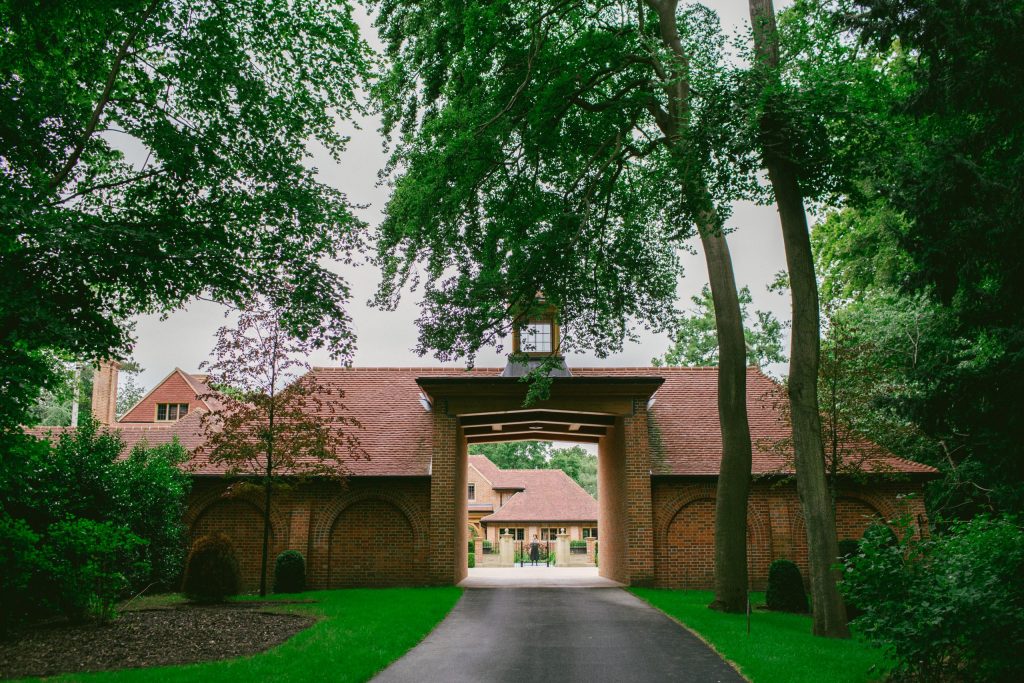 Arriving up the woodland drive to the Gatehouse