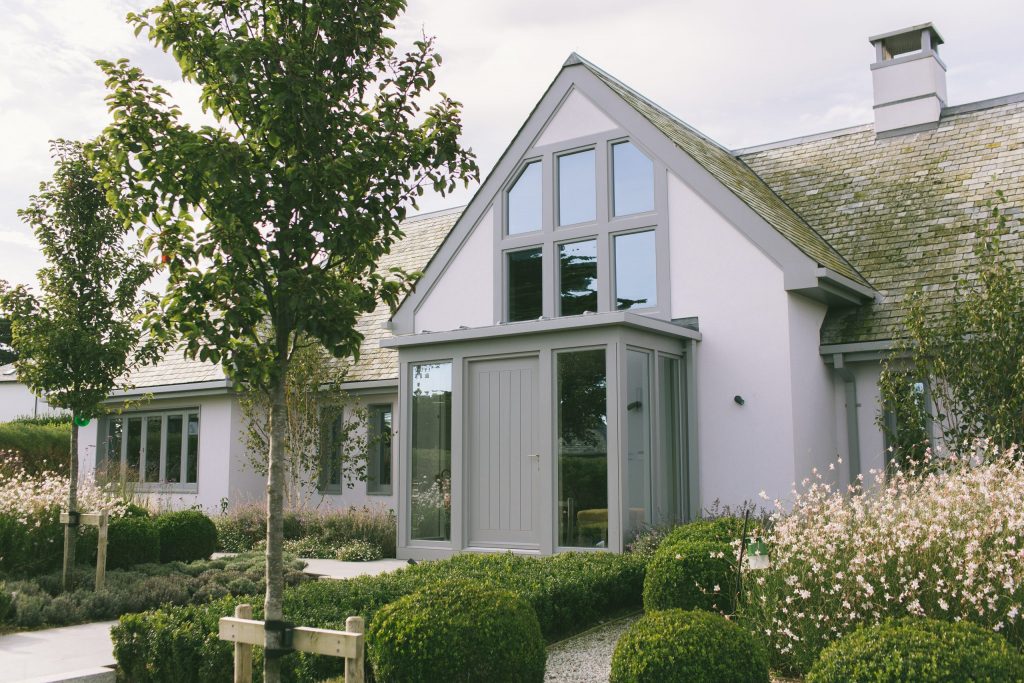 The front entrance to ‘Sparrows’

Sparrows started life as a modest three-bedroom bungalow set within North, South and East facing gardens on the beautiful, rugged Cornish coastline. The client had owned the property since the late 1970s, but due to several issues with the bungalow, including poor build quality and subsidence to the foundations of the garage wing, they approached us to design a replacement house for the site. We were given a relatively simple brief that included five bedrooms, an open-plan kitchen and living space and separate private sitting room where the owner could escape the noise of visiting grandchildren. Other than that, the brief was relatively simple, and we were given free rein to come up with ideas.

‘……external elevations and the building plan are based on Classical principals…...’ 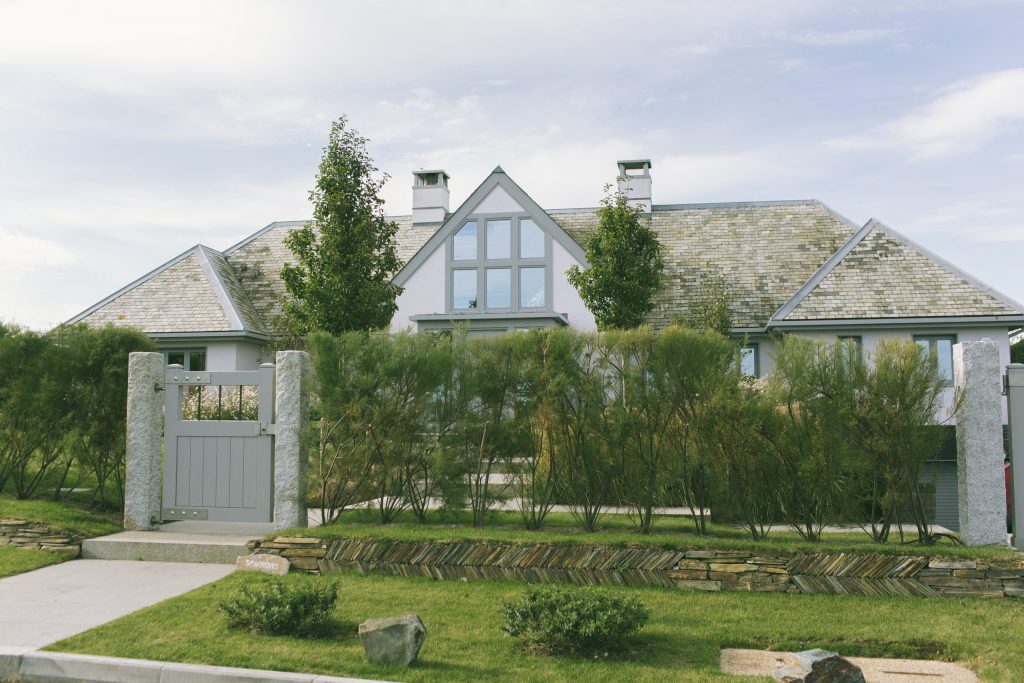 Cornish materials and colours in harmony between the house and garden 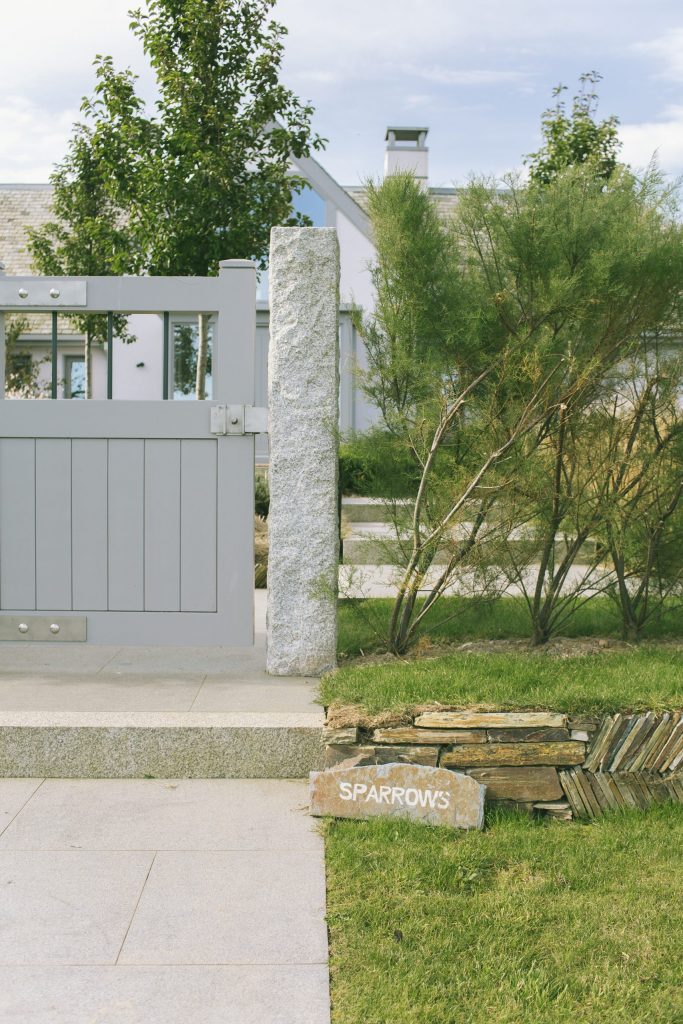 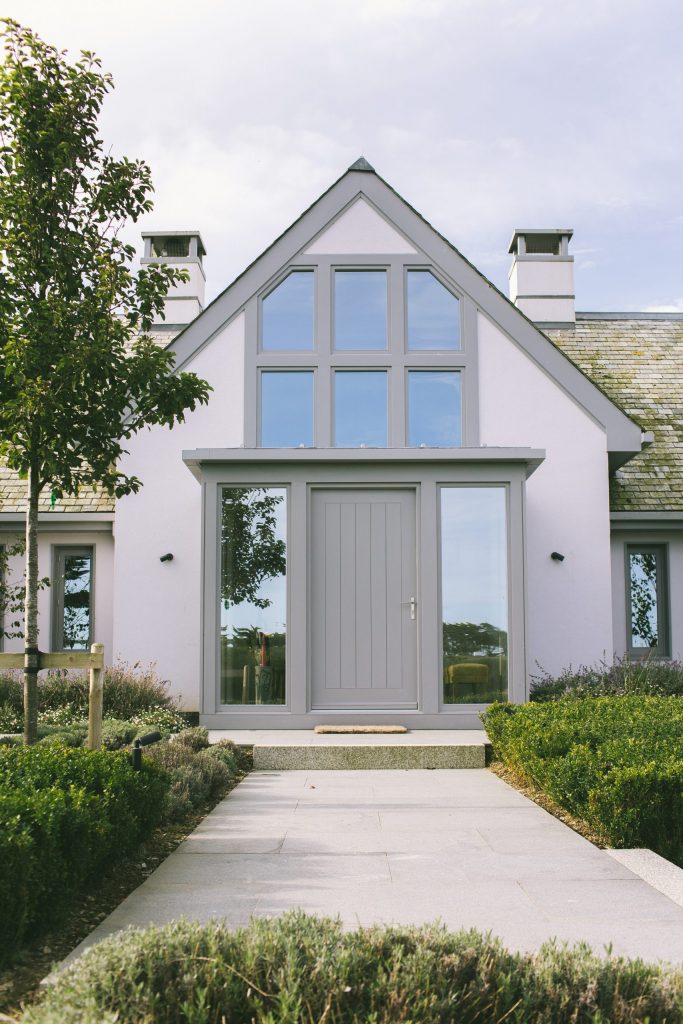 A modest timber porch to the North entrance forms a subtle approach to the front door, which is signified by the projecting bay of the central mass and is highlighted by the feature tripartite window that forms a gable end. The flanking wings either side also project, but instead of having dominant gable end features, have hipped roofs passing back to the main roof that covers the central core of the building.

Although the design of the house has a contemporary ambience, the design and proportioning system used to form both the external elevations and the building plan are based on classical principals, which is a similar vein running through all our work. Proportions of the room sizes, heights, widths, and lengths relate to a consistent series of numbers to create each individual space and which are then linked together. The design of the plan focuses on the central core of the building; originally, I designed the building to be a simple H-plan with two wings to the East and West and a central mass. We found that the building plot was large enough to take a slightly larger building than the existing structure, so we introduced a central core that included a full height entrance hall and main living space behind. We very quickly came up with the idea that this room should be separated by a glass screen with gallery mezzanine over the top that would link the two bedrooms occupying the roof space. 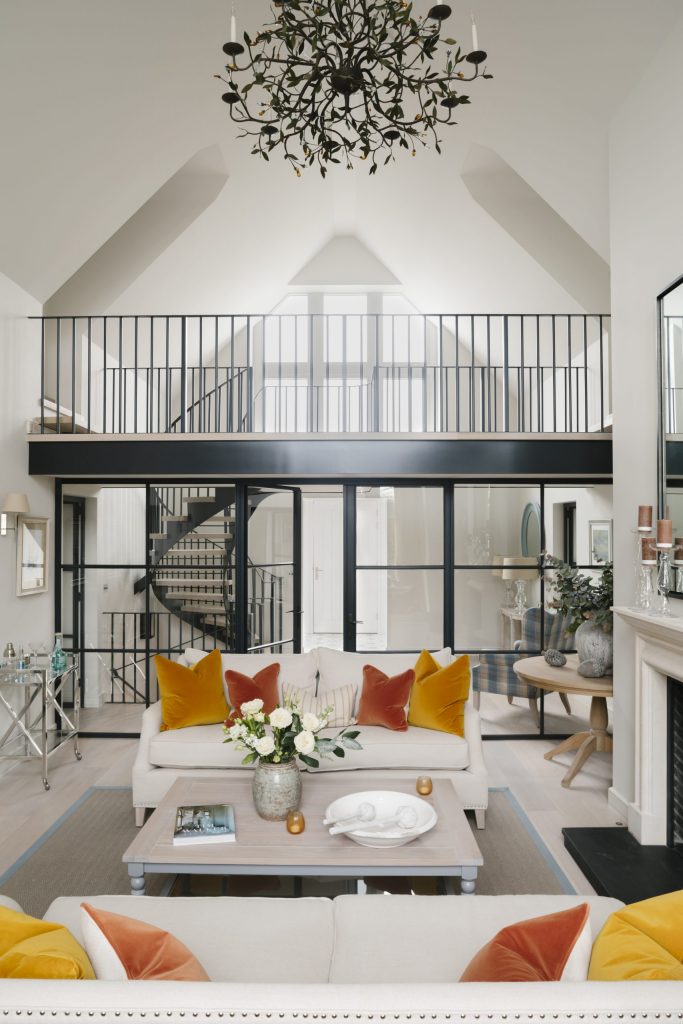 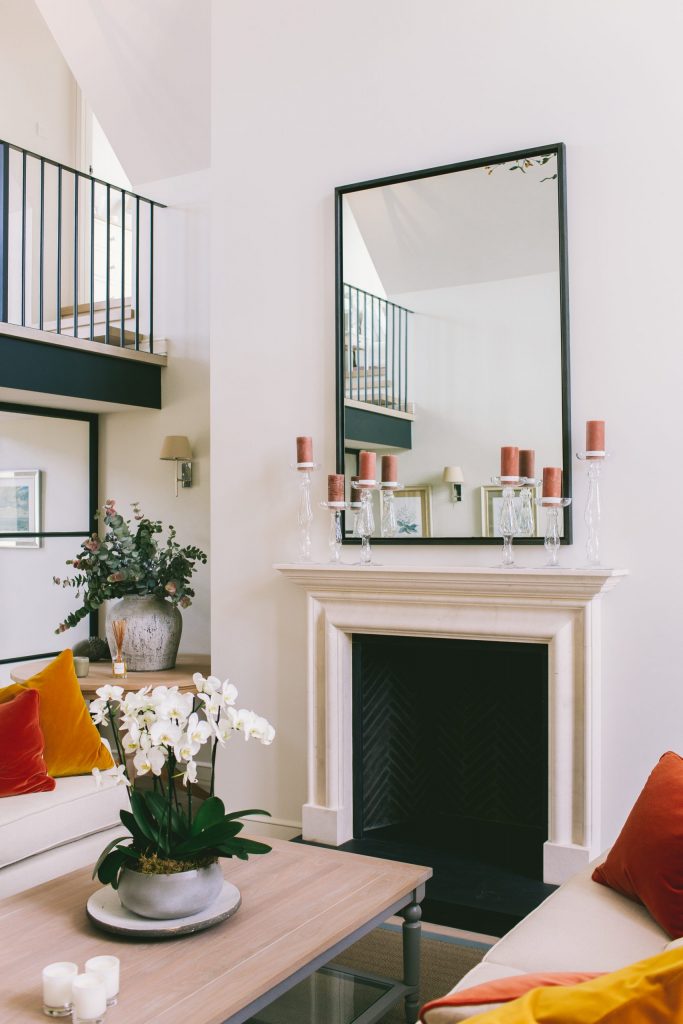 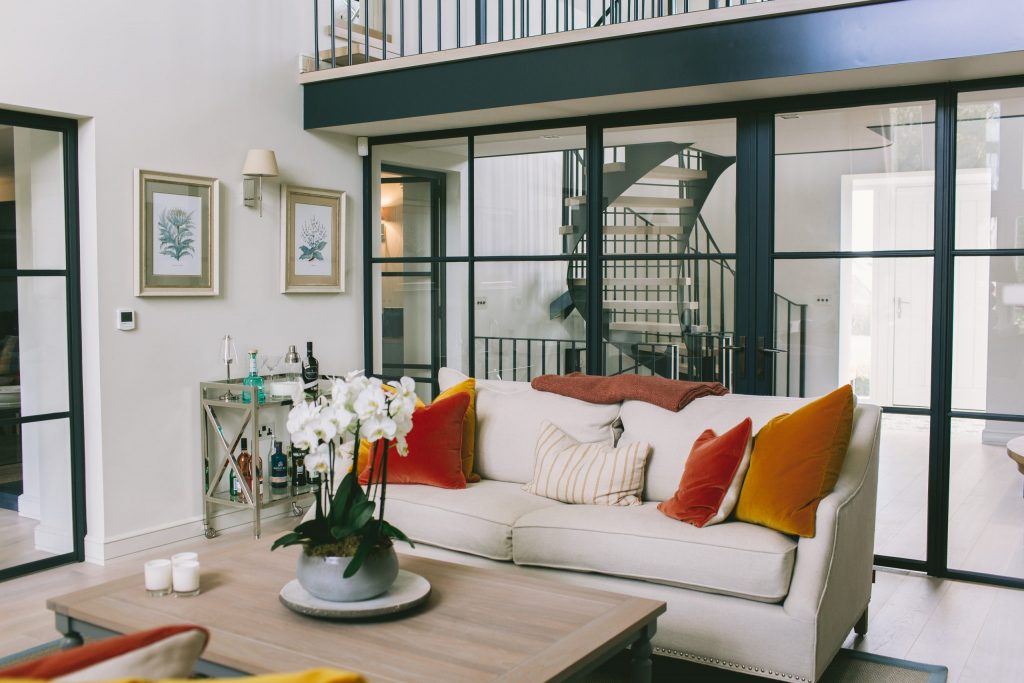 I wanted to ensure that the scale of the structure closely resembled the original scale of the bungalow, with only single storey elevations. In order to create the additional bedrooms that were required, we increased the depth of the plan as much as possible to maximise the volume of the space so that comfortable rooms could be situated within the roof voids. Careful planning of the interior spaces enabled us to create a large open-plan living area that includes a generous kitchen on the Western side of the house flanking the entire West wall, together with a boot room, WC, generous seating area, and sitting room in the West wing of the house. The East wing of the house includes three bedrooms all with en-suites. 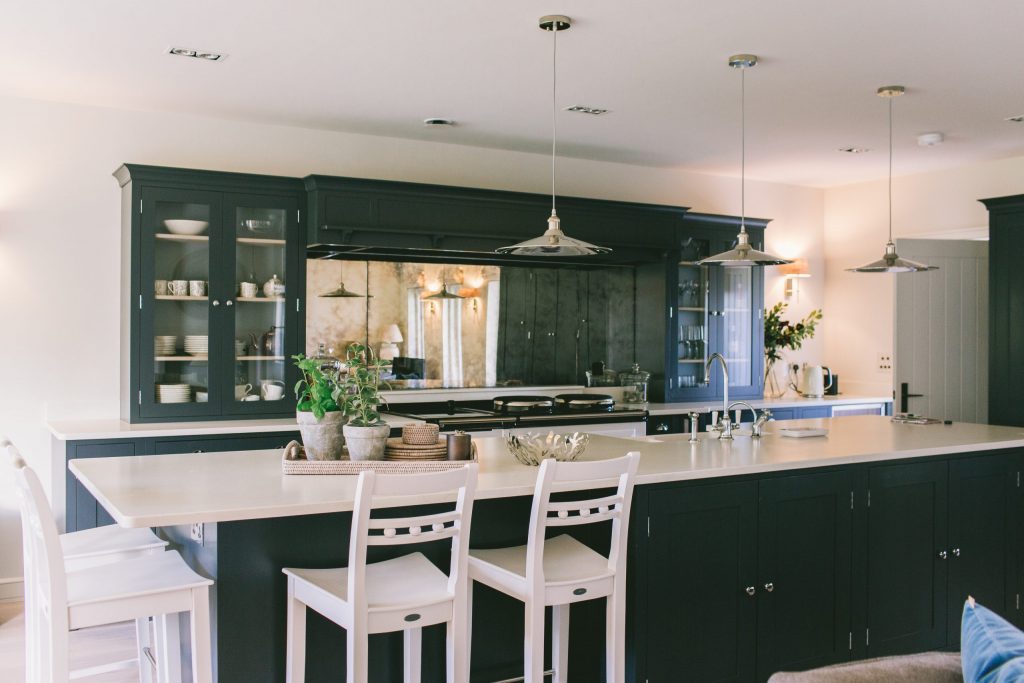 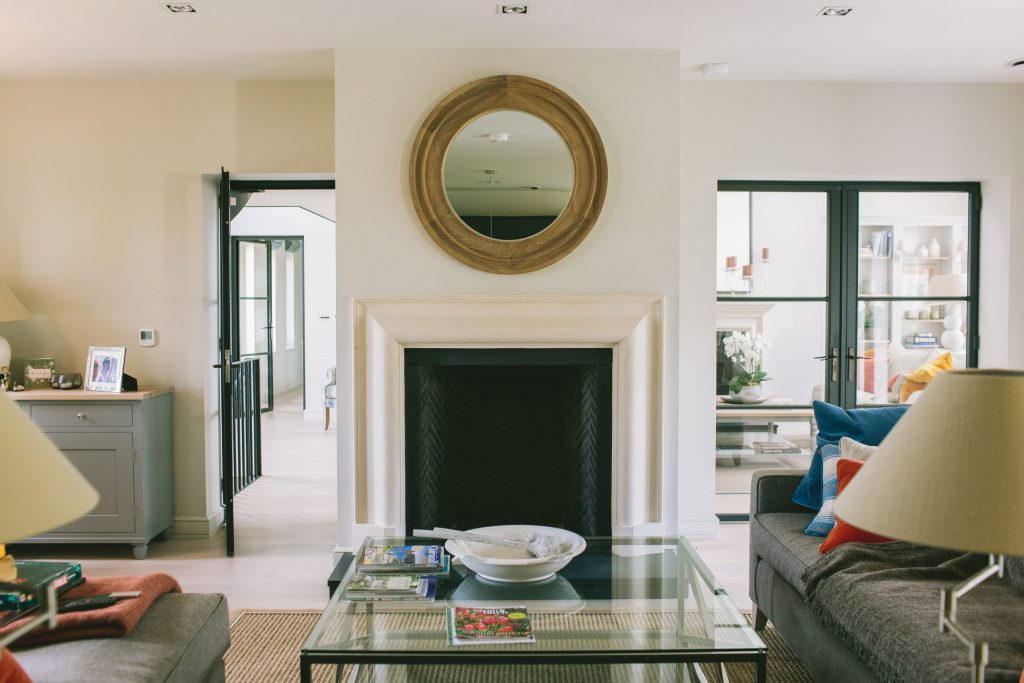 We had been able to design generous room sizes, but the position of the staircase to the link the first-floor bedrooms had not yet been resolved. During the design process and following several design meetings with the owner, we decided to include a substantial basement structure to the Western part of the house, which included an underground garage, games room, and utility room, this provided the additional living space and service space that the owner wanted for the house, but it gave us another conundrum as to how to deal with the means of getting between the floors in what is a relatively modest building plan with large rooms.

‘….something that resembled a nautilus shell to represent the coastal heritage……‘ 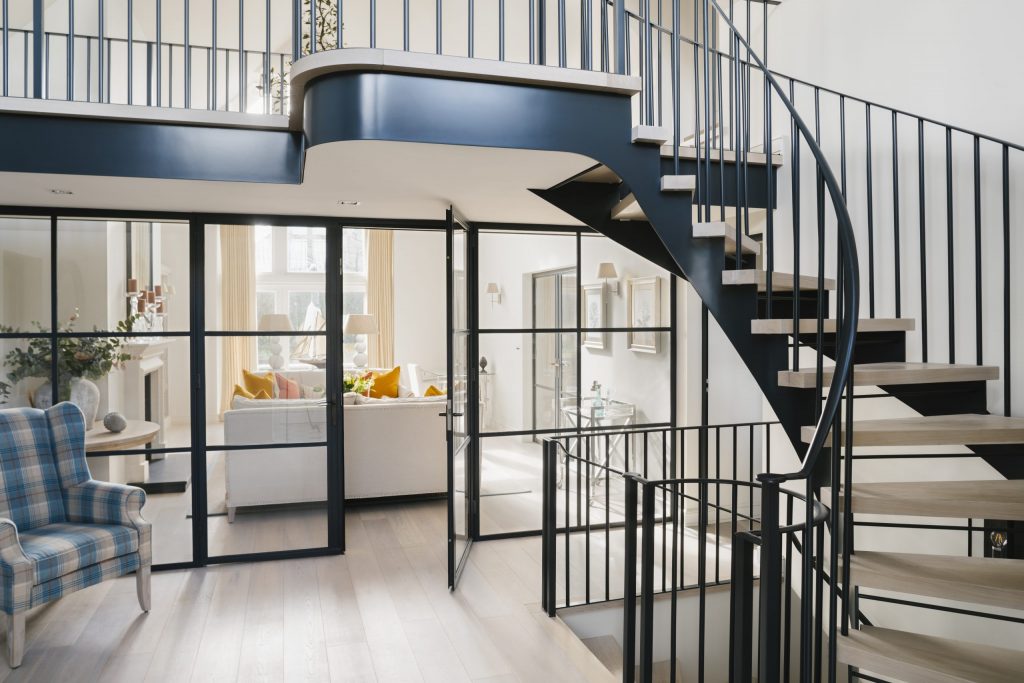 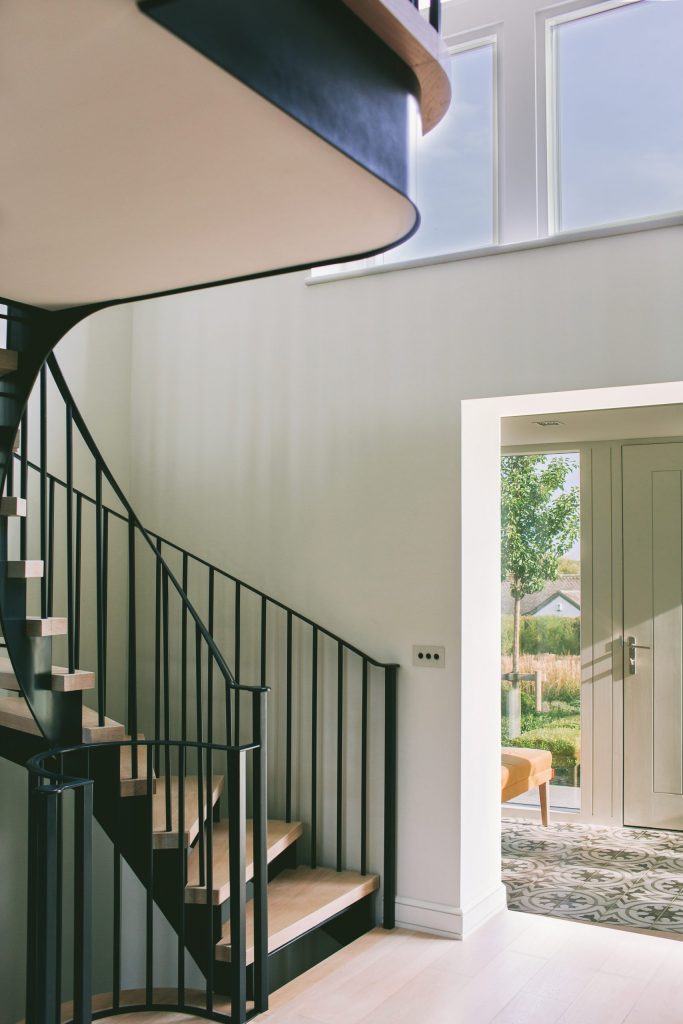 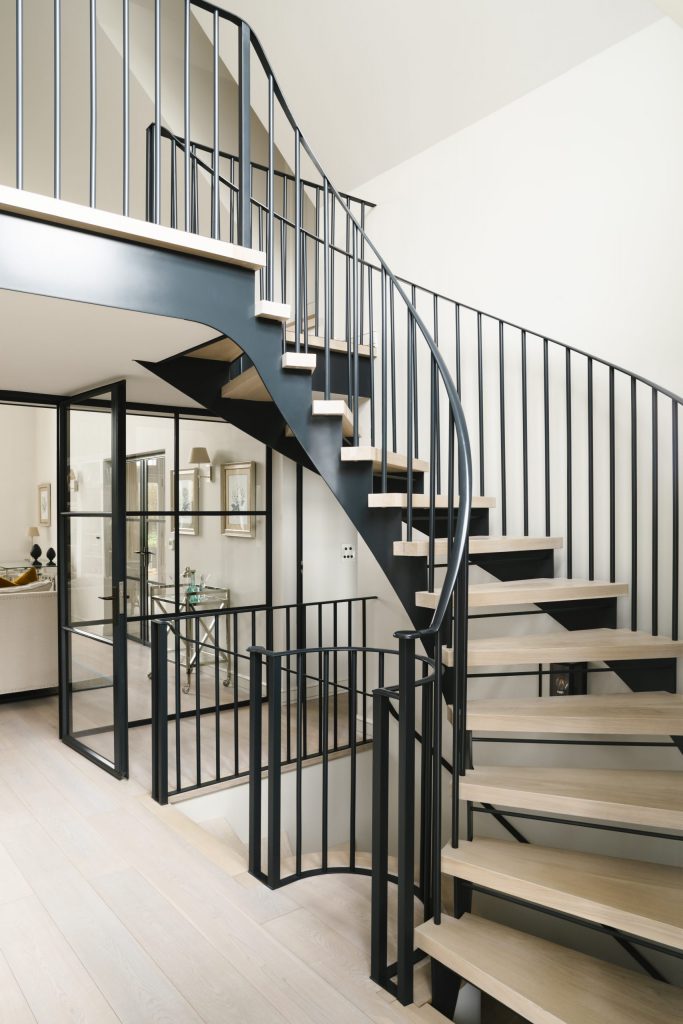 We resolved the dilemma with what became one of the main features of the house, which is the unique staircase to the main entrance hall. We wanted the design to work alongside metal glass screens we chose to separate the ground floor space with, matched by the flanking glass doors that give access to the corridor to the bedroom suites and the doors to the living accommodation to the West wing. I wanted to design something that resembled a nautilus shell to represent the coastal heritage of the site. The staircase is a simple steel structure that is designed around two open steel strings curling around and up to a balcony structure linking the two bedrooms, one either side of the main hall, with the entrance to each of the bedrooms bursting through the roof pitch on the first floor of the main hall. The balcony structure is made of the same metal and has a simple squared baluster with a D-shaped metal handrail sweeping down the conical staircase. The whole ensemble fits within the entrance hall on the North entrance of the house and frames the double height living space behind.

‘Internally, details have been kept simple and contemporary….. 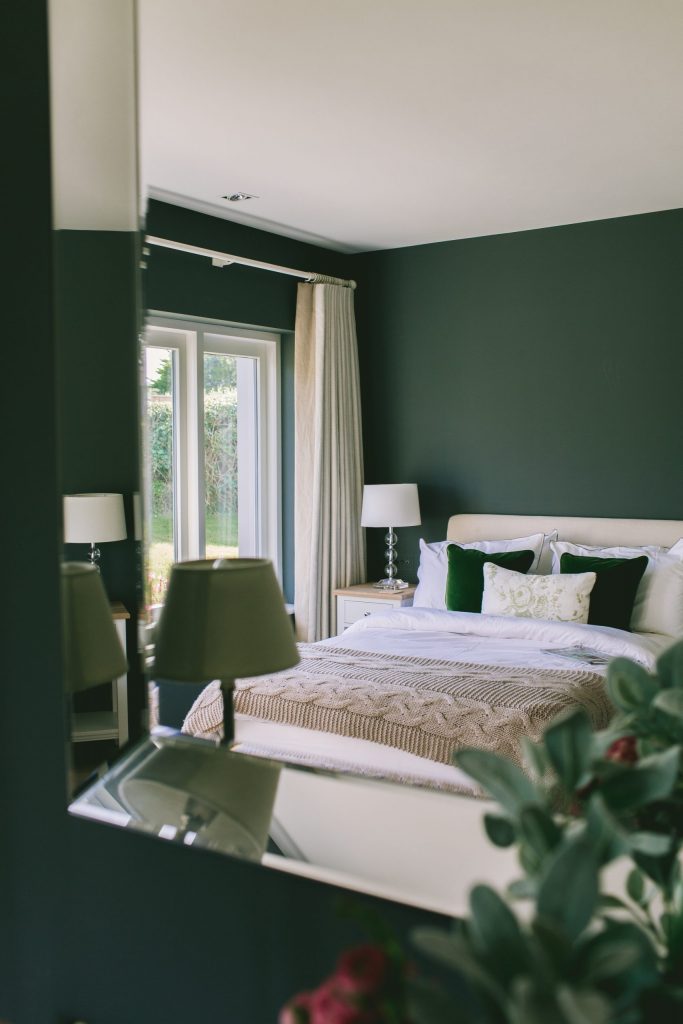 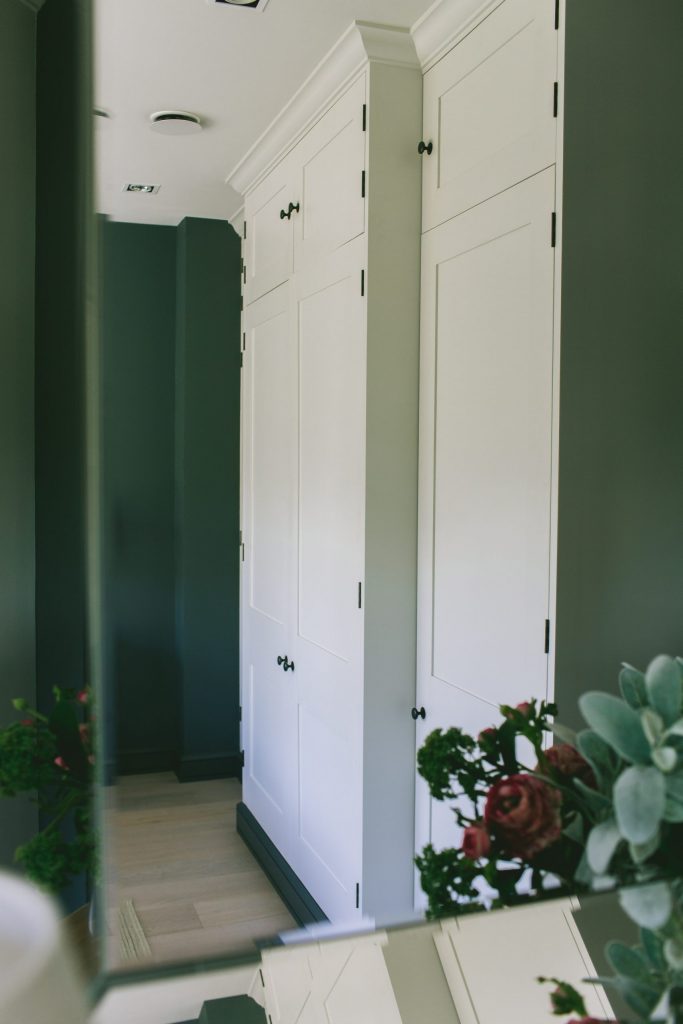 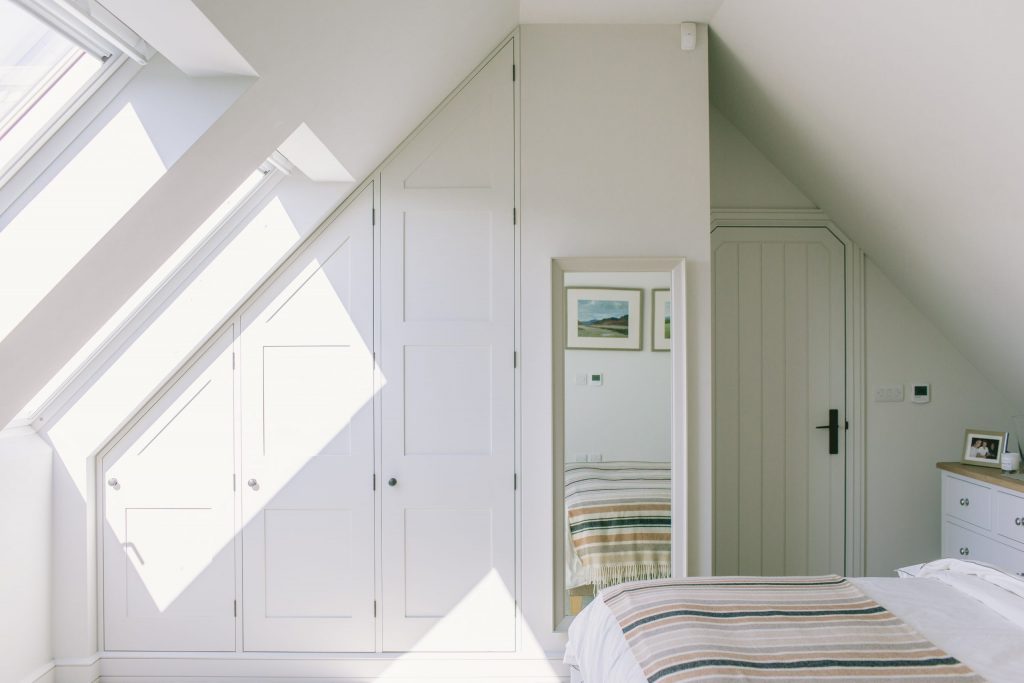 Internally, details have been kept simple and contemporary, with a notable omission of any classical detailing cornice work or decoration. The floor is a limed oak finish with a simple matching profile to skirtings, architraves and door details that were designed to be a contemporary variation on our more traditional profiles. Windows and doors throughout were designed by us, and are painted hardwood double-glazed casements largely throughout, with fixed feature glazing to the principal elevations. The South elevation mimics the detail of the tripartite feature window to the entrance North elevation, but is the entire height of the structure, passing from floor up to the eaves. A projecting brisolei from the South elevation creates solar shading to this large window, which is also glazed with Pilkintons Activ Neutral glazing system to reduce solar glare within the room. The room itself is a triple-height space with a large feature fireplace to its centre flanked ether side by bookcases, creating a serene environment flooded with natural light. Glazed double-doors give access to the sitting area and kitchen to the West wing. The lower portion of glazing to the South gable has a set of bi-fold doors to enable the room to be opened onto the rear garden, which is entirely private. 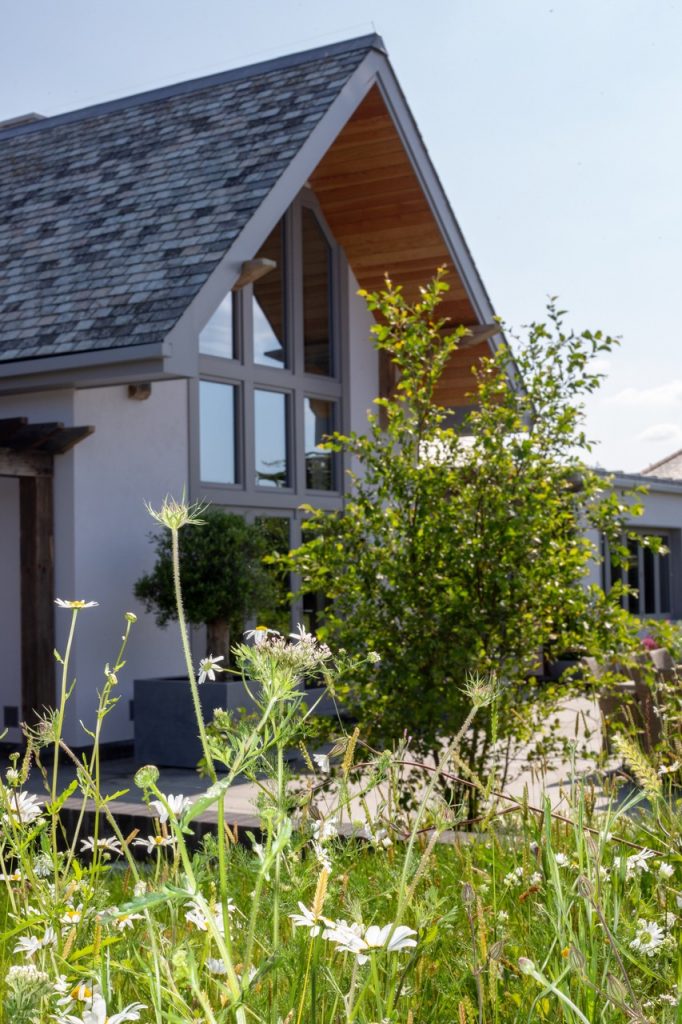 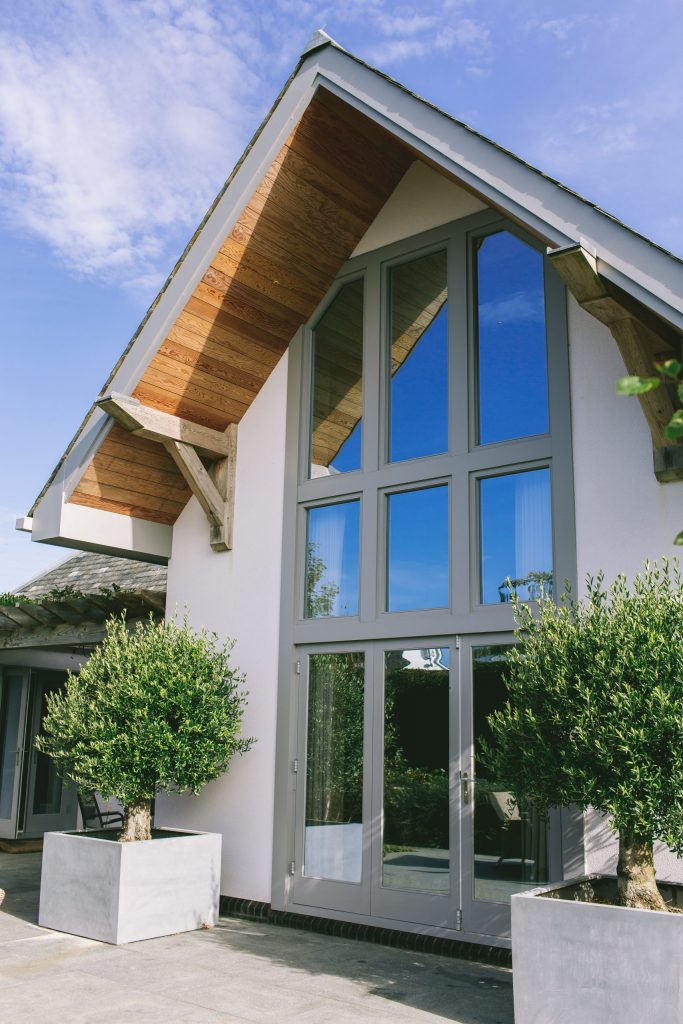 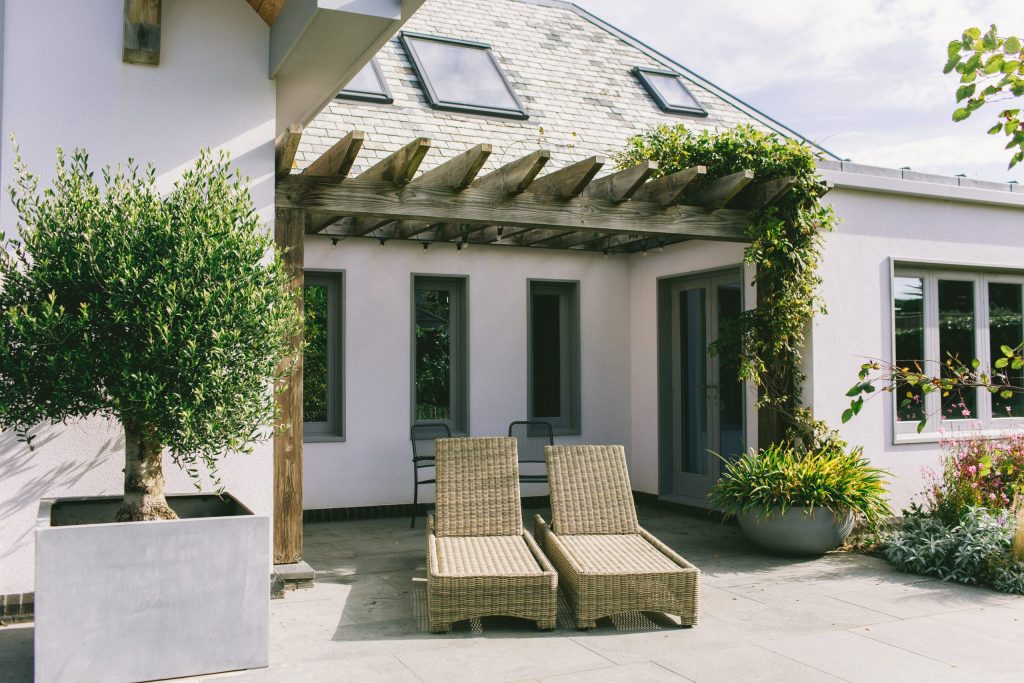 The terrace to the South elevation has been sunken down with a retaining wall created to the boundary to create a more private space that is usable during the Summer and Winter months. The sitting room to the West wing has a set of five-leaf bi-folding doors that open out entirely, allowing the room to be opened onto the loggia that sits between the central bay and projected West wing. This is matched on the East wing and adjoins the principal bedroom, which has a set of double doors opening onto the loggia to enjoy a morning coffee. The loggia is formed simply with Douglas Fir principal rafters, posts, and beams, to create a space that allows the wisteria and clematis to cover it, creating soft dapples of shade to enjoy during the Summer months, as well as an area of cover that protects from rain during the Winter months, or on cooler Autumn evenings.

One of the principal features of the exterior is the large expansive overhanging roof taking direct influence from the local vernacular tradition. Similar to the large expanses of many of Voysey’s roofs, the form of the roof is highlighted by the leaded hips rather than by using clunky hip and ridge tiles. The leaded hips extenuate the hip lines and the ridge line of the roof, allowing the reclaimed delabole Cornish slate roof to shine.  Two feature chimneys to the centre are symmetrical to the space, serving the sitting room and main living space in the centre of the building. Painted stainless-steel cowls were designed to prevent the Cornish weather from passing down the chimneystack, as well as preventing the local seagull population from nesting in this space.

‘…allowing for a crisp finish to the external elevations…. 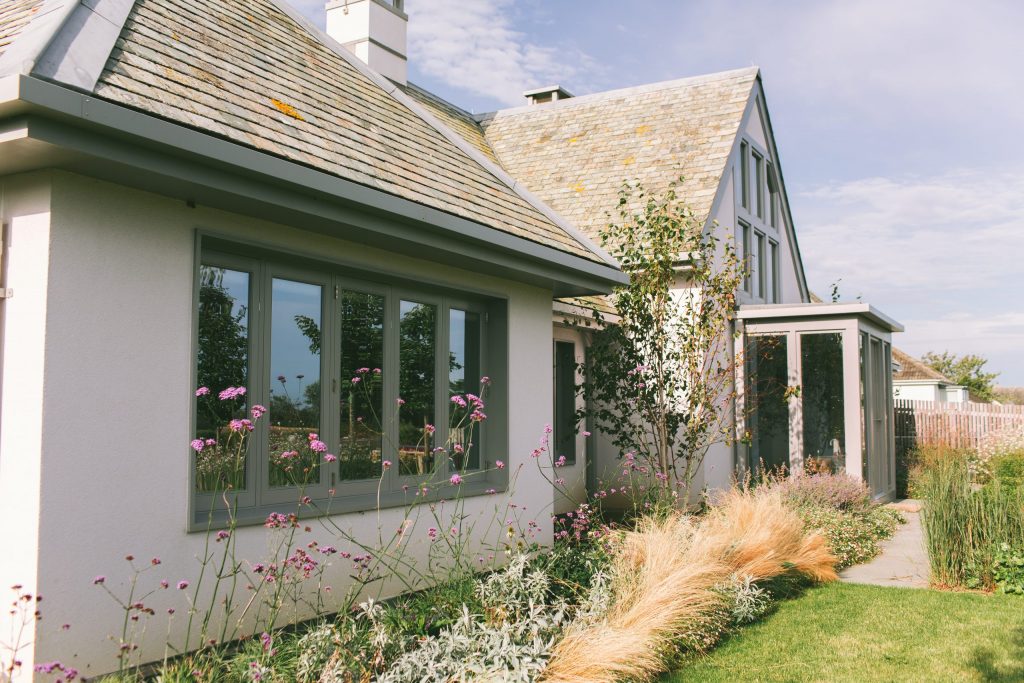 External details are subtle and simple and include hardwood jamb, head and cill boards to all windows and have a rebate allowing for the render to pass behind, allowing for a crisp finish to the external elevations. The render is a lightly textured white-violet colour which works well with the subtle purple-grey colour to the windows, doors, and joinery features. The deeply overhanging eaves are crowned with a box-section aluminium gutter throughout, with square downpipes to shed the water. A black brick plinth with a chamfered brick at it’s top, at the transition to the render, provides the base for the building and is continued in the wall structure to the driveway, cobbled with granite sets. A simple metal guardrail links the metal used in the entrance of the house. 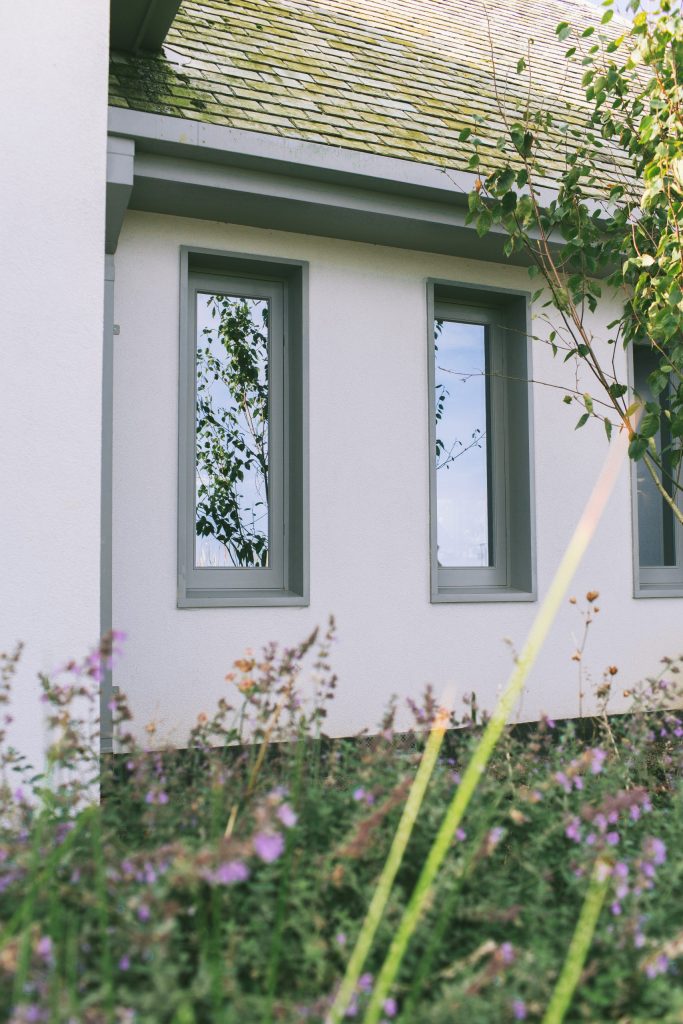 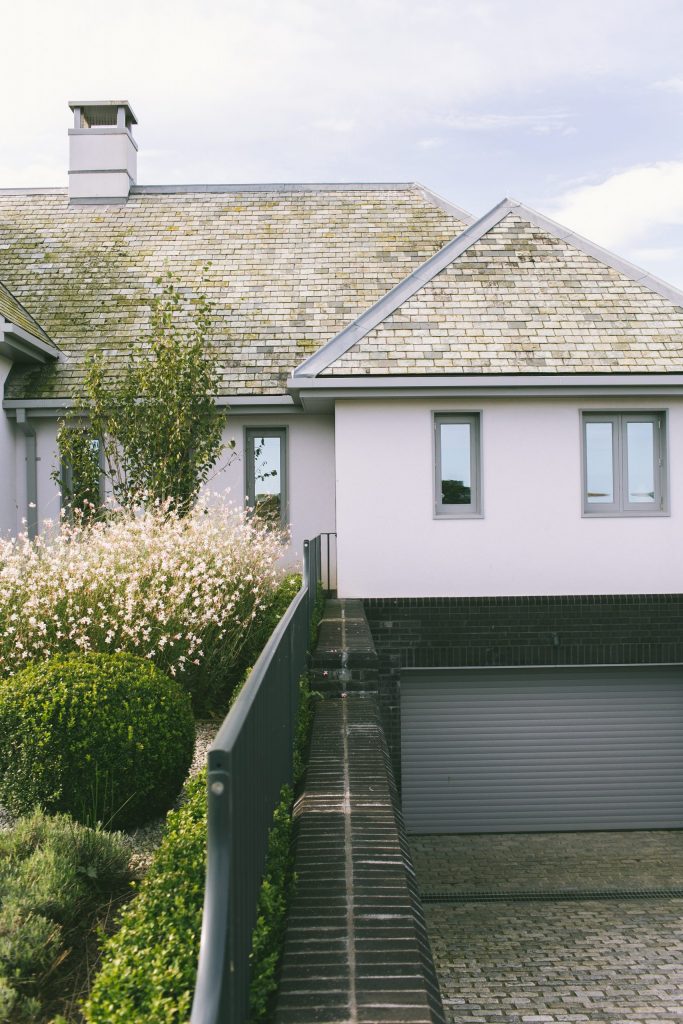 We also designed the entrance gates, including the pedestrian gate and large driveway gates which are formed using single piece scabbled granite monoliths supporting giant stainless-steel hinges that we designed and that carry the electric operated painted hardwood gates. Subtle metal detailing again links the features to the inside of the house. The grounds and gardens were excellently design and executed by Hendy Curzon, with the house being built to a wonderful quality by Terry Harris & Sons, a local Cornish contractor.

Interiors, including the bathrooms, were designed by us but heavily influenced by the client who made all the principal choices for sanitary ware, tiled finishes, and wallpapers with a taste that would make any interior designer proud.

Cabinetry to the bedrooms including wardrobes, drawers, and a feature games room cabinet in the basement were all designed by our studio and made by Terry Harris & Sons’ excellent joinery shop. 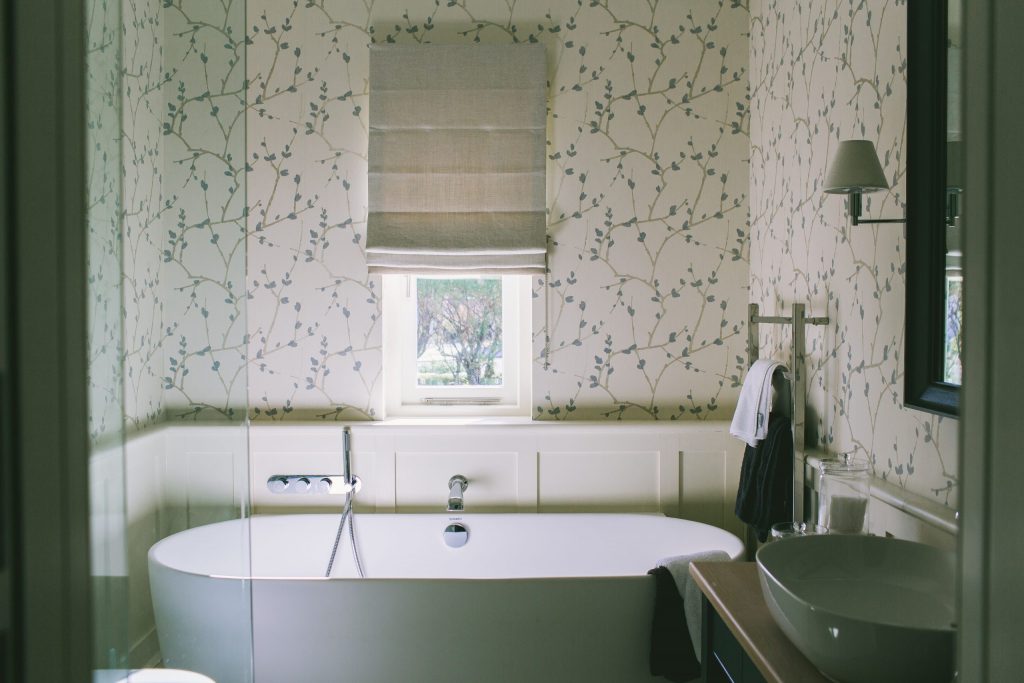 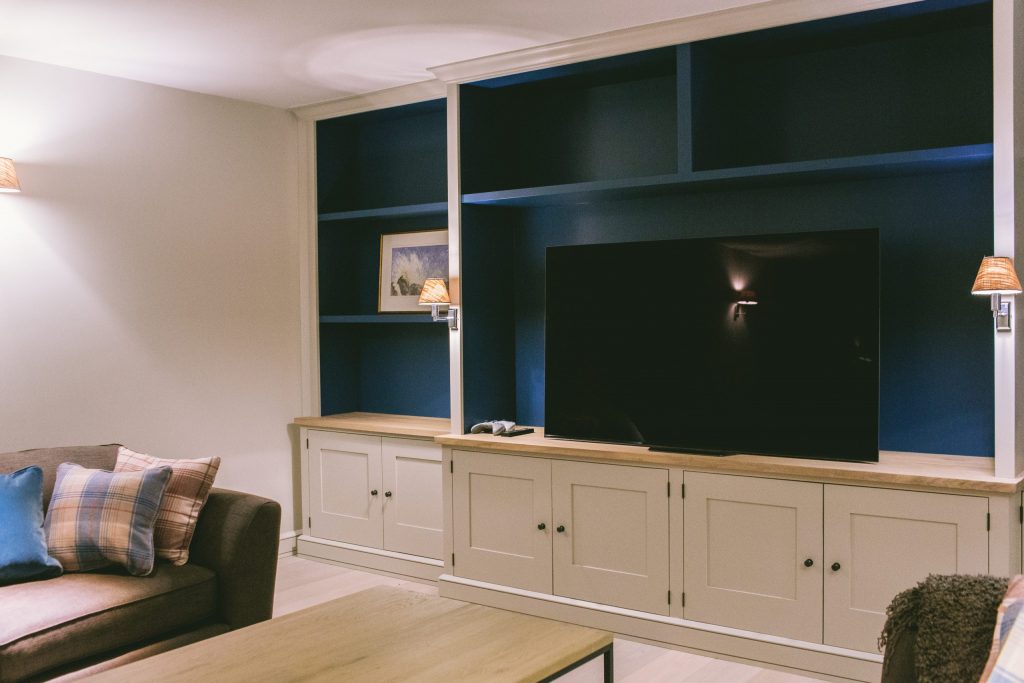 ‘…to pay simple testament to the beachside location of the house.’

To finish, we designed a set of beach huts in the rear garden in the form of a quaint traditional three-gabled hut made from painted hardwood with a slate and leaded roof over in order for the owner to store surfboards and other beach related paraphernalia and to pay simple testament to the beachside location of the house. 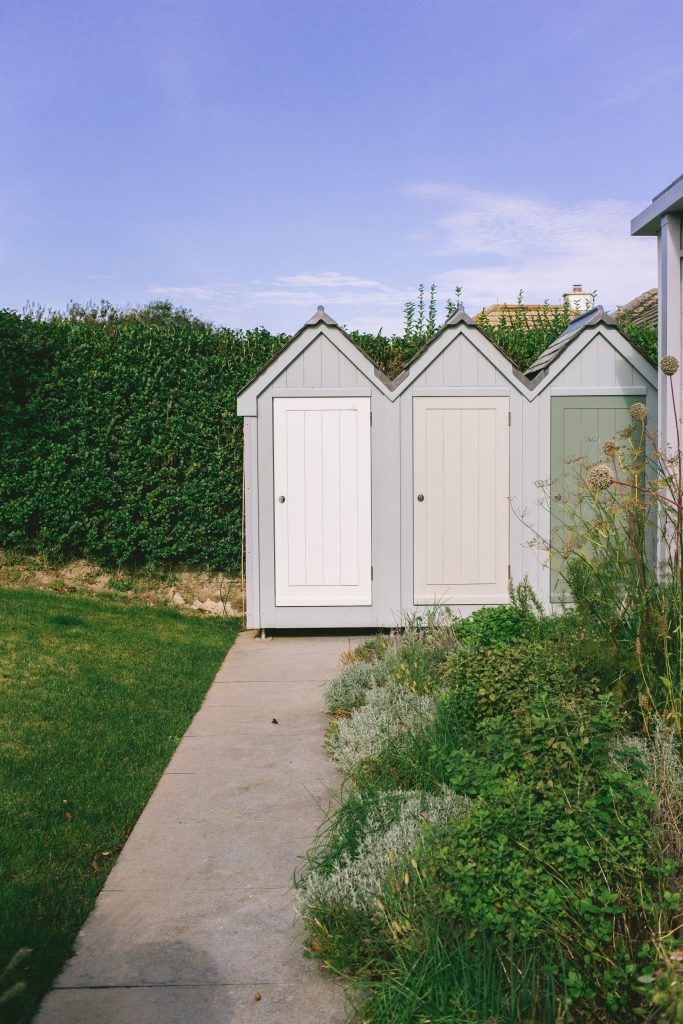 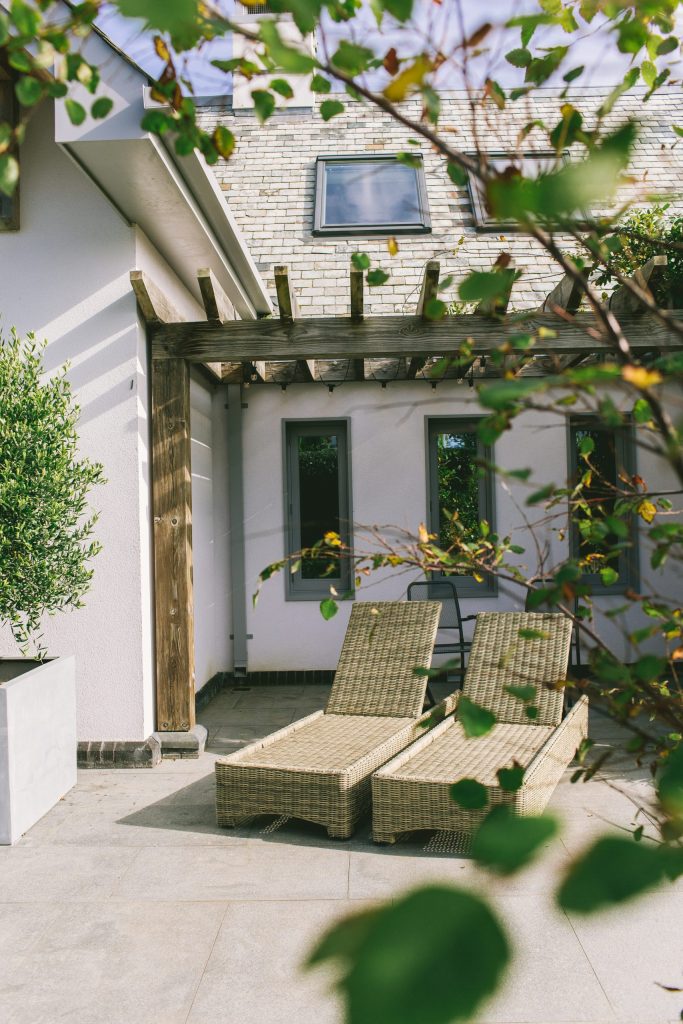 Sun trap under the garden loggia